The sky the morning after the storm was bright blue with charming white clouds, now harmless, arranged across the sky like teeth in the grin of a psychopath post-knife plunge. A gang of red, black and grey squirrels emerged from their safe havens and skittered along branches of damaged trees, pulling together new nests. They make it look easy.

The tornado warning came over my phone around 4:15 EDT, Friday, September 21st. It was tracking south and west, skirting the city. My mistake was I believed the Environment Canada report, as though nature could be predicted and corralled like a well-trained German shepherd.

The wind whipped walls of black clouds together, bent trees, tossed unanchored small objects into the air like a maniacal juggler. Better get the dog out for his walk now, I thought. It was a brief foray. Some sense arrived in my head as I watched the clouds gather like a mob. We scurried home, the small 13 lb. dog dragged at the end of his leash before we could launch like Toto and Dorothy. The rain began as we ran up the front  porch steps at 4:40.

I had dinner plans with a friend for 6:30. By 6:00 the worst of the wind and rain appeared over. I hadn’t listened to the news or turned on the radio and so in ignorance I got into my car and drove. The CBC World at Six radio news lead story was on the Trans Mountain pipeline. No mention of a tornado in Ottawa other than politics, as usual. I drove on.

The traffic lights in my neighbourhood were working and cars moved normally, until I turned onto the Airport Parkway, the road leading downtown. That’s when the sky dropped Olympic swimming pools of water over my car repeatedly and the road turned into a river. The wipers flipped uselessly back and forth across the windshield. I scanned for the roadside to pull over but saw nothing through the deluge.

I slowed to 25 kilometers per hour and turned off the radio because I couldn’t hear anything over the thumping of water on the roof of the car. I passed under bridges taking a breath under each at the one second of respite from the bombardment before the car was engulfed again. I hung on to the steering wheel, leaned forward, felt the tires under me push the car on, and watched for oncoming headlights to keep me to the right side of the road.

Every traffic light for the next 10 kilometers was out. Still, I pressed on. Dinner and my friend beckoned.

I know what you’re thinking: dumb, right? Experience, my trusted teacher, had not prepared me for this event. I over-rode common sense in my excitement to spend time with my good friend. Besides, this is Ottawa, capital of the Great White North, I said to myself. Tornados don’t happen here. Ice storms, yes. Fifty centimeters of snow in 24 hours, for sure. Gooey thunderstorms toasted on forks of lightening – absolutely. Killer tornadoes? Nah.

There was no dinner to be had. I met my friend in dusky Hintonburg. Not a light flickered in any windows anywhere within 10 kilometers. We abandoned our plan and headed home.

By then the rain had stopped but the wind persisted. It rearranged the sky and decorated the western horizon in shades of orange, lavender, grey and pink – a 1960’s psychedelic mess. A monarch butterfly blew by, tipping and tilting in the wind. Ah, another senseless creature like me foolishly challenging nature to a duel. In a field to my left silent Canada geese, their necks tucked in, hunkered down.

As I drove, I listened to reports on the radio to the destruction in the west end of the city: flattened homes, businesses, and displaced families. The tornado had jumped the Ottawa River and ripped through the wilderness of vast Gatineau Park, overturned cars on the north-south highway between Ontario and Quebec, and proceeded through west Quebec where it destroyed more homes and neighbourhoods. Lives twisted into chaos in seconds. I blinked at the radio in disbelief. This doesn’t happen here.

When I arrived home at 7:20 the power was out. We fumbled in lowering light for candles and flashlights.

The next morning while we made coffee on a camp stove, secure under an intact roof, we listened to the transistor radio and CBC reporters interviewing now homeless families. We heard that the city’s power grid took a hit worse than the ice storm of 1997. The inundation I drove through the night before was the tail end of a tornado that struck a power station a few kilometers away. 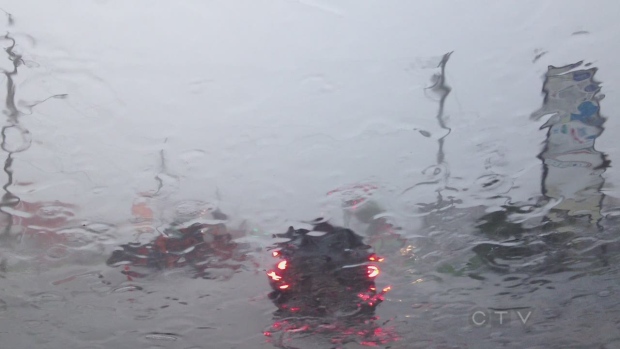 47 thoughts on “That Doesn’t Happen Here”